“These people need only the slightest push and they will throw off the hand of the Administratum. I will show them the truth of the matter, and they shall see who really has their best interests in mind.”

Lady Orleans is a straight-talking, no-nonsense Rogue trader with a reputation for square dealing. Master of the Tempest-class frigate Starweaver, Lady Orleans continues the proud traditions of the Orleans Dynasty, recently coming to the aid of the beleaguered Damaris system. Though mostly known as a trader, Orleans is known to not shy away from warfare should it be required, and its rumored that she bears no love for the Ecclesiarchy.

Starweaver, though smaller than some ships, is armed to the teeth with heavy Mezoa-pattern macrobatteries which Orleans commands with admirable skill. Though unable to match the sheer firepower of cruiser hulls and higher, Orleans makes the most of her ship which is usually more than enough.

Passing a Hard (-20) Investigation roll (Rogue Traders are well known to be more secretive than most) will yield Orleans full biography. Common knowledge ( no roll required) will yield the above information. 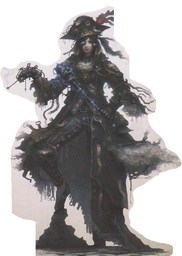