" ‘Steal’ is such a harsh word, friend. Think of it as long-term borrowing at gunpoint."

As free-wheeling a spirit as can be found in the Expanse, Jeremiah Blitz is the (recently ex) captain of the ostentatious tradeship Ordained Destiny. Known throughout both the Expanse and the Calixis sector as a grifter, a confidence man, a licentious rake, and a marginally scrupulous gun for hire, the good captain is a newcomer to the business of intergalactic trade. Until very recently a dealer in artefacts of dubious provenance, Blitz got his step up in the galaxy by winning his Warrent of Trade in a high-stakes card game witha powerful member of the Adeptus Terra. With the ink of his warrent barely dry and the largest ship he’d ever captained in his possession, the new Rogue Trader set out on yet another grand adventure.

Recently, however, Blitz’s luck seems to be on a downward swing. First, a disastrous failed attempt to recover a priceless treasure called the Dread Pearl cost him dearly in thrones and followers. Then, an excursion as a “privateer” in the Drusus Marches failed when his “prey” turned out to be a well-guarded House Saul convoy. Finally, he was caught sharing the confidences and companionship of a courtesan pledged to a powerful Confessor in the Calixian Ecclesiarchy. Blitz barely escaped death and dismemberment at the hands of a howling mob of Frateris Militia.

Now, a diminished but undaunted Jeremiah Blitz has turned up at Damaris. With creditors scouring the galaxy for him, he sees the business on Damaris as a chance to regain some of the lost wealth. He uses his immense charm and silver tongue to convince all and sundry that his first concern is the defense of this sadly underdefended bastion of humanity. Of course, should he be rewarded for any small part he could play in this endeavour, he would most humbly accept. His real feelings, however, are that he’ll do as much as he has to as long as the money keeps coming from Damaris’ coffers, and will run off with anything and everything he can get his hands on if there’s even the merest chance that Damaris will be overrun, unless someone stops him.

Blitz has the uncanny ability to keep himself alive against all odds. His instinctual sense of self-preservation has saved his skin more times than he cares to count; something that your party is all to aware of. For the moment, Blitz stands behind Elizabeth Orleans, and his experiances and contacts have proven to be useful to her. He knows that Kapak is losing control, however he wasn’t counting on the arrival of the Argos, and familiar faces from the surface of the Dread Pearl have come as a shock.

Most recently, Blitz’s bad luck has come to a disastrous head. While taking part in Damaris’ orbital defence, Blitz made numerous tactical errors, leading to his ship being rammed repeated times by Ork raider vessels. His ship all but broken and nearly hulked, Blitz is trapped on Damaris without a warp-capable ship. Without his ship, his fate as well of that of the remains of the Ordained Destiny, remains uncertain. 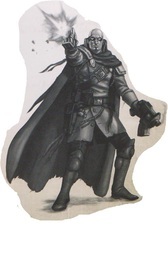