Leader of the Damaris Astropathic Choir

Astropath Stasys is an ancient and loyal servant of House Kapak whose family has been serving the governing house of Damaris for centuries. Tall and spare with a body ravaged by decades of exposure to corruption and the Warp, the leader of Damaris’ Astropathic Choir is the longest-serving member of the gubernatorial court. Despite his hideous appearance and twisted limbs, Kevil Stasys is a delicate, soft-spoken, ascetic man who rarely speaks aloud and prefers to communicate through his not insubstantial psychic powers.

Passing a Difficult (-10) Investigation roll on Stasts will yield his full biography. Common knowledge (no roll required) yields the above information. 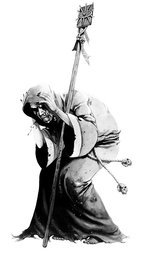